A polite oops, upon realising I haven't posted here since the end of last year. I thought I had. And then discovering I'd left this post in draft mode (technology and me, we will learn to embrace each other).

This year has been, unexpected, on a few levels which is all par for the course of life and I know it's giving me a wonderful depth of emotion to draw upon for my storytelling.  However, in saying that, I've come to some conclusions that mean I need to pull back a bit. Not that this blog has been busy (or regular) however, it does play on my mind.

Being a regular user of Google Reader (so not looking forward to the demise of this and finding a new way to stay on top of my blog reading), I know what I like regarding how many posts etc. I'd always intended this blog to be roughly once a month and that hasn't happened for quite awhile.

The result being a decision to go into a hibernation of sorts (hence the chrysalis images). In saying that, many wonderful things happening to many around me, I may well come by here and shout it out here along with twitter.

I'm not leaving the internet, I socialise (at times way too much) in various places and can be found most easily on twitter. If you tag me in a tweet I'll get notified and reply.

Meanwhile, in the interim, for myself, it's getting back to words. To telling myself the stories that are backing up in my brain.

Posted by Nicky Strickland at 11:25 No comments:

This meme feels like a round of “tag-you’re it”, once the domain of the school playground, this game has been doing the rounds in all my writing spheres.

The lovely Jane Domagala tagged me and I in turn have managed to chase down three willing victims, er, participants.

It’s a chance to have a peek into the things to come out of writer’s minds in all their delightful hues.

The Next Big Thing

What is the working title of your book?  Firewalker

Where did the idea come from for the book? Watching the weather and listening to the news in particular the various and ever increasing reporting of the natural disasters occurring globally.

What genre does your book fall under? Fantasy and depending on your personal definition urban or contemporary (think mermaids in our world).

Which actors would you choose to play your characters in a movie? I don’t work this way. I more hear the voice than see the person. Possibilities would be Rose McGowan for Sofia, David Giuntoli (from Grimm) for J'Red.

How long did it take you to write the first draft of your manuscript? Dirty draft took just under five months.

What other books would you compare this story to within your genre?   Hard to say, I’m sure there are others out there, I’ve yet to come across something and say That!, That is where I sit.

Perhaps some tv cousins (perhaps a second cousin) would be the series Lost Girl, or even Grimm. The principle that non-humans live among humanity and battles have been going on long before humans ever existed.

Who or what inspired you to write this book? This story fell out of my brain and is part of a larger idea/series. The inspiration stemmed from an artefact - The Gundestrup Cauldron. Why was it found where it was. 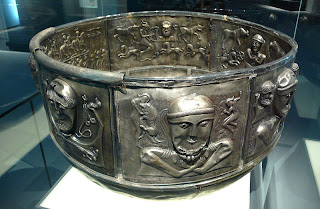 What else about your book might pique the reader’s interest? If you’re tired of vampires, demons, shifters and angels (fallen or otherwise), this series has none of them. Instead it’s nosy humans, mermaids, sylphs, salamanders, gnomes and elementals.

And so the time to tag and pass on this meme to others has arrived. Enjoy having a look at what fantasy writers Eleni Konstantine, MJ Scott and contemporary romance writer Sandra Antonelli have coming up in their writing pipelines. Each will post their responses towards the end of December (Eleni's the 28th) or early January.

Posted by Nicky Strickland at 11:24 4 comments:

GenreCon has come and gone and what a blast it was. Being the first of its kind (in Australia) I was curious to see how the amalgamation of the various tribes would go. I've been a part of all three at some stage (most noisily in romance and spec fic) and it truly was wonderful to be able to catch up with friends from all areas at the same time.

The panels were a good mix of topics and I think the idea of using topics that were wide enough to encompass each genre, then having someone from each tribe being on the panel worked brilliantly (instead of say, a specific genre focused topic).

Given two of the three guests were from NYC (and giving the phrase shelter from a storm a whole new level of meaning), the guests of honour were lovely to meet and very generous sharing their wisdom, experiences and generally being available throughout the con.

The banquet dinner on the Saturday night was fun and the chats between courses a great idea. Sarah Wendell's presentation of a live snark went down brilliantly and I'm sure many will never view a platypus the same way again...especially when the highlight end cover was revealed. I know personally, bow ties and fuschia have gone to a new level of understanding (or therapy required).

After two days of interesting, thought provoking and inspiring panels, the con was wrapped with a Great Debate. A topic which has been since time eternal, a dilemma...Plotters vs Pantsers. It brought the house down with both sides bringing their best game. For those witnessing it, I doubt it will ever be forgotten. A fantastic way to wrap up.

GenreCon has been successful enough that there will be another next year, with Brisbane the host. I recommend highly anyone from any genre to experience it. I know I'll be trying to get to it.

A huge shoutout, bravo and sleeping vouchers to the organisers of GenreCon - the Australian Writers Marketplace, with Meg Vann, Peter M Ball, Aimee Lindorf, Sarah Gory, Sophie Overett, Simon Groth, Perry Woodward, Sharon Phillips,  among the list of invisible ninja staff who held it all together.

I've come back exhausted, inspired and ready to tackle the next phase of my life - both in the mundane day-day sense and the writing sense. Below are a number of links to various attendees of GenreCon who have given wrap ups of the event. If I find others, I'll update as I come across them.

Posted by Nicky Strickland at 19:56 2 comments:

How did October get here?

Halloween is nearly upon the world and that means the DarkSide DownUnder blog is due a birthday. How time flies. Two years in fact. Some great celebrations are going on over there, complete with blog hops and giveaways. Go and have a squiz at what the Darksiders are getting up to, or under...or through for that matter (one never knows with paranormal writers). 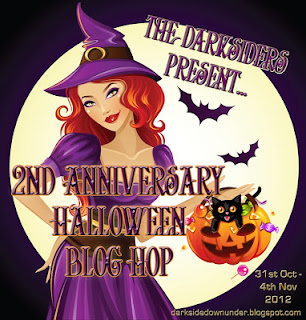 I’m off to the inaugural GenreCon being held in Sydney over the coming weekend. It’s a coming together of multiple genres, primarily speculative fiction, romance and crime - my three favourite beasts. I’m sure there will be more pondering thoughts to come from what looks to be a great line up of guests and panel topics.

A year of changes. I knew 2012 was to be one of those. If you told me what some of these changes would be I’d be disbelieving. Living in interesting times is well, interesting. A lot of fodder for the mill of my brain which is still being chomped through.

Not to mention this house has a new resident in the form of a Ninja Kitty. 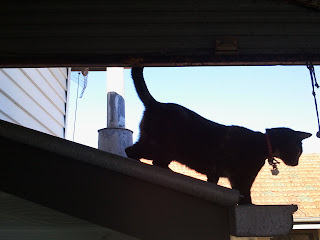 Posted by Nicky Strickland at 20:42 No comments:

Wow. 2012 has arrived. Already it's in double figures. January has that effect on me. It's one of those months that you look forward to and boom! you blink and it's gone before you know it. I never feel like I've had the calendar turned onto January for the full 31 days. Weird but true.

So. 2012. At last we meet. Sure, there's been heaps of talk of an apocalypse being the big feature for you at the end of the year but for me so much will happen before that...well, I may need an apocalypse to catch my breath. You are going to be a year of new phases and lifestyles. Why yes. Plural.

My son is off to university to pursue a career in physics and moving in with his dad. I will have gone from school-mum (or mom for those who prefer) to empty-nester in the space of three short months. I don't have time however to actually navel gaze this life transition. I'm too busy preparing for another one.

My wedding (the 1st of the letter "W"s). It is under five weeks away and I like to think of it as being caught in The Wedding Vortex. There shall be some traditional things (we do say vows, sign paper & then break bread after all) but there are many things that may not be seen as traditional (though what goes for traditional these days?).

In amidst all this I am also this year no longer in a day-job (well, at least until August or September). So, my new "day job" is writing. I'm finally able to spend my time on my words (the other "W" in my life). I shall continue to develop the Elemental series as well as get on with writing my Vestal Virgin centric story.

I'm looking forward to these changes. As the only constant in life is change. Saying that, I will however be continuing my reading challenges. They help keep me focused. I'm keeping records of them over on Goodreads I'm again using the challenges set up by Book Chick City (who I found via the wonderful Eleni).

My choice this year shall be -

I'm always wanting to expand my exploration of authors and genres so this fits beautifully. I'm going with 25 as the goal. Should be do-able.
Posted by Nicky Strickland at 16:19 1 comment:

Nicky Strickland
Brisbane, Australia
I'm a storyteller. I love playing in worlds where the fantastical is part of our own.

What happens on a writing day.